Disclaimer. this is a craft tutorial as well as dating advice, I’m really only qualified to discuss the first topic, the second is my amateur and some what jaded opinion. If you’re here for the crafty advice only,  you will probably want to filter out the other parts as this is not my usual blog post. So, here we go….

Valentine’s Day, heavy sigh… When you’re 40-somthing, sans children and never married this holiday can bring to the surface a bunch of annoying feelings and sarcastic remarks..

Last month I was invited to participate in a Valentine’s Day collaboration with a group of DIY’ers  on Youtube.  I was excited to be working with this very talented group, but I was also thinking that I didn’t have a lot of positive things to contribute when it comes this holiday.

As I was deciding what project to do for my video, It seemed like a modern version of a Sailor’s Valentine would be fitting.  In the 1800’s, sailors brought home seashell covered boxes, after being out to sea on a long voyage.  Traditional Sailor’s Valentines are very elaborate, often octagon in shape. See my Pinterest board of some of my favorite’s here,

Since I myself have been waiting for love for an extended period of time, and I’ve made quite a few seashell crafts, this is what I went with. 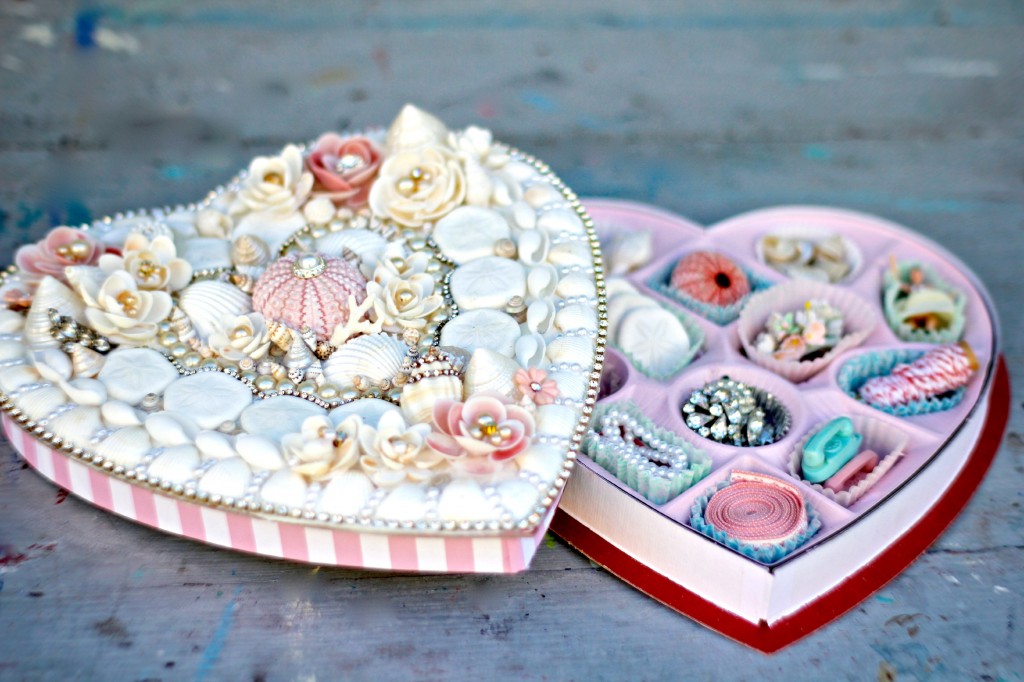 More than a few years ago I was featured in Marie Claire magazine, the article was titled “Why am I still single?”

I had about a months notice, I think I went to the gym everyday and ate veggies all of the days leading up to my photo shoot, I was soooo hungry when this shot was taken, the make up artist had just finished a crash diet himself and he was munching on chicken wings while he applied my mascara.  As he smacked down on another bite, he said, “not trying to be rude but have you ever considered a padded bra?” Oh boy, despite feeling like I was on a foreign planet that day, I thoroughly enjoyed the whole experience,  there was so much humor in everything that happened and  it was so very different from what you might think a glamorous photo shoot would be like.

You can’t tell from this pic, but the shoes were so high that I could not walk or stand in them, they posed me in the chair and strapped the shoes to my feet.

The dress was several sizes too big, most of it was pinned behind me and I had vaseline on my legs. they kept hiking up my skirt and I kept trying to bring it back down. “don’t worry Debi you look great”  the photographer said, as chicken wing boy nodded in agreement. (it may sound like I didn’t like the make=up guy, not true he was really funny, this is just what stands out the most in my memory).

A Marie Claire stylist, had called from New York a few days before for my big session in LA. “Who’s shoes do you have?” she asked. I replied, “who’s shoes? um I have some shoes, they all belong to me…”

Me, “ohhhhh I have a ton of flip flops and some cute wedges from Marshalls, not sure’ who’ made them, probably Quick Silver?

The stylist sounded annoyed, asked my shoe size and said she was going to send out some dresses and shoes for the shoot. I was to show up at 8am no make-up, hair clean but not styled.

It was also my 35th birthday, so after making the drive up from San Diego,, I planned to spend the rest of the weekend with my friend Shayne who lived in west Hollywood.

The interview portion took place over the phone, The writer first spoke with my Mom, Shayne and my best friend Tania, getting their opinion as to why they thought I was single, then she called me and read their responses for my reaction. 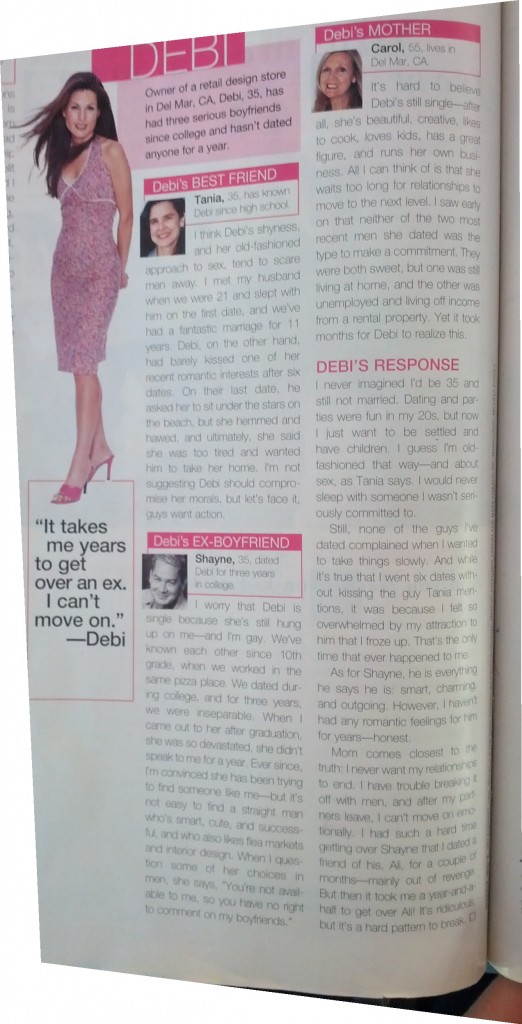 when the article was printed a few months later, my Mom and Tania were both upset because they were misquoted. Shayne was super happy with his portion, I was excited to see myself looking totally glam and unlike my everyday self. I didn’t really care about the some what overly dramatic nature of the article, I had read Marie Claire and knew that, that was the style of their writing. Many other fun things happened after that, like old boyfriends from jr high finding me, a radio host calling me up and a ton of blind dates,  but I need to get into the  craft tutorial portion now, so here’s the video, and some more commentary on the article…

I have had plenty of time to reflect on the subject of love, the mistakes I’ve made along the way and being single in my forties. If I could go back in time this is what I would have changed, I wouldn’t have wasted  so much time, trying to make someone else fit into my vision of what I hoped they would be and I would have focused on becoming what I needed to be.

Shayne was one of the best friends I’ve ever had, he was always encouraging me to follow my dreams and he was so out going and fun to be around, I think my crush on him was a lot about wanting to be as vibrant  magnetic as he was.( You can read more about Shayne and the amazing gift his friendship was in this post.)

After a lot of pain, frustration and missed opportunity  I finally tackled shyness and anxiety.  It took awhile, three years of acting classes, the first day was so hard I almost left in the middle of class, over time it got easier and eventually Wednesday nights were the highlight of my week.

Fear can be such a thief, the thing is, when you face it, it has a positive domino effect on everything.

In many ways I feel like i’m just getting started on my real life and have a a lot of catching up to do..  There are many experiences that still freak me out, but when this happens I march right in.  I never want to go back to the girl I used to be and I know that anxiety is a small price to pay for living fully.

I get many emails, asking how to start a business, how to make a dream come true, it really comes down to not letting fear stop you and taking action every day.

Of course there are lots other tips to share, but that will have to wait for another post.

If you have any advice to about love, crafting or shyness please share  in the comments below, I’m still learning 🙂