I still remember the first cake I baked. I was about ten years old and Vicky, our Bluebird troop leader, let us take turns adding to a box of yellow cake mix. I watched her pull the cake out of the oven using oven mitts and thought, “What’s the big deal? I can do that!” Days later, I called my mom at work and asked if I could bake a cake on my own. I figured she’d be too busy to say “No” and wouldn’t want to listen to my protests anyway. I was right. Later in life I’d use the same tactic when I wanted permission to shave my legs and wear make-up.

After that first time, I baked constantly. I baked more than even a ten-year-old with an insatiable sweet tooth could eat, so I’d give my creations away to anyone who would take them off my hands. My ballet teacher, the housekeeper, my grandparents, they all became members of Janina’s Cake-Of-The-Week Club. I loved the taste of cake batter and licked the beaters quickly so I wouldn’t have to share with my sister. I don’t know how long my baking fervor lasted until I got bored with packaged cake mixes and moved on to something more exciting, like boys. It wasn’t until a high school Home Economics class that I baked my first cake from scratch. It was a German Chocolate Cake and making it was far more exciting that using a mix. I sifted, I measured, I melted chocolate, and I made a mess. I felt like a cross between Betty Crocker, a mad scientist and Party Animal Barbie. The difference between scratch baking and using a mix was like the difference between Oprah Winfrey and a drunken co-ed. My German Chocolate Cake was like Oprah: dark, rich, and complex. My packaged mix cake was the drunken co-ed: cheap, easy, and forgettable. Again, I baked often and ate a lot of cake batter. Then I hit my early twenties and set down my spatula in favor of bad boys in rock-and-roll bands.


Even in my wild, wild twenties I still baked from time to time. I’d whip up plates of chocolate chip cookies for roomfuls of party animals with the munchies. I even dabbled in cake decorating and created Ninja Turtle and Shamu cakes for my nephews. When my son came along, I designed an elaborate three-tier circus themed cake complete with carousel and legions of clowns for his first birthday party. It never occurred to me to count the number of servings. I ended up giving away enough cake to feed the Duggars for days.


Again I set my spatula down. Working fulltime, often at jobs I hated, combined with the demands of single motherhood left me with little energy to bake more than the occasional pan of brownies or batch of cookies for my son’s class parties. 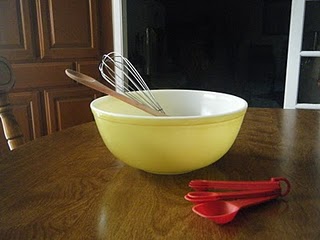 Fast forward about 19 years to the day I met my sister Debi. We had just enjoyed a Thai dinner and I announced that I was ready for a sugar fix. Debi took me to a nearby cupcake bakery. It was pink. It was sparkly. It was all girly gorgeousness. My son waited outside.(I think he was worried that his testosterone levels would drop.) And the cupcakes! Oh the cupcakes! They looked like edible tutus. Pirouettes of sugary buttercream frosting topped with arabesques of edible glitter. I agonized over my decision and settled on three mini-cupcakes. I took a bite and thought, hmmm, maybe the next bite will be better? I tried the next flavor. Nope. I tried the next. Meh. They were bland, mealy, and just plain disappointing. I muttered to Debi, “Mine are better.”


Debi had told me about The Mermaid’s Mercantile. Intrigued, I checked it out and was floored by all the amazing artwork assembled in one place. It was one stall after another of feminine, vintage delight. The Mermaids were so welcoming and were clearly having a wonderful time in each other’s company. I just had to be a part of this sisterhood of talent. When I asked Debi if I could have a space at the Mercantile to sell my cupcakes, she said something along the lines of, “YESSSS!!!”


From that point on I dreamt in sugar. I could think of nothing else (except, perhaps, men, and maybe wine). I baked two, sometimes three times a week. I tweaked some flavors and abandoned others altogether. I decided on lavender cupcakes with rosewater buttercream and deep chocolate cupcakes with peanut butter frosting for my first sale. They were a hit! I reveled in the way my customers moaned and their eyes rolled back in their heads when they took their first bite. I still do. It’s how I know I’ve nailed it. My repertoire has expanded to include flavors like chamomile, chocolate chipotle and piña colada. I have several repeat customers who seek me out now and I’ve even catered a few parties. 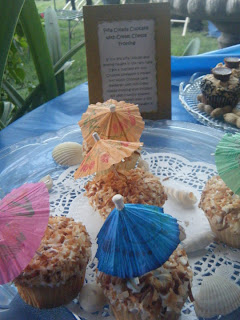 It didn’t take long for me to realize that the kitchen was my calling. I’d been working towards a nursing degree and hating every minute of it. Nursing seemed like a good, solid career path, but I had a hard time mustering up any enthusiasm for it. I dreaded the thought of a future filled with other people’s body fluids. So I changed course and enrolled in pastry school. Now THIS was a career I could get excited about! Since then I’ve been reading non-stop: chef’s memoirs, cookbooks, baking textbooks. In short, I’ve become a pastry geek. Everything I’ve read tells me I’m in for long, stressful work shifts in a hot kitchen to the exclusion of a social life and ever seeing daylight. I can’t wait to start!

Please be sure to visit my blog!
http://cupcakeinshe-devilpanties.blogspot.com/ 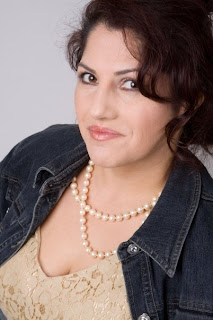