How to make Seashell covered Letters and a big giveaway!

So as I said in this video, I have made a lot of these Seashell Letters, (thousands of them). Back in 2006, I was making these letters and selling them in my shop  and they were one of my best selling items.
I decided to send one of my Seashell Letters off to Coastal Living Magazine in 2008.
In the November issue, Coastal Living  published a photo of my letters along with info on how to buy them from my website. well when that happened, my website was flooded with orders for them!
It was Christmas time and I don’t think many of the readers realized that the letters were handmade by one girl in a tiny 400 square foot cottage, they were expecting them to be shipped as soon as they were ordered… Well I threw myself into filling my orders as fast as I could make them.  ( keep in mind that when it comes to my work, I am a perfectionist and there was no way one letter would be shipped that wasn’t just as beautiful as the ones I made to be photographed for Coastal Living…. 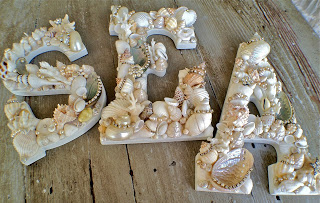 This was an all out effort, my Mom moved in with me for about a week, to cook for me, do my laundry and run errands, my sister took over running my store for two months, a good friend who was off work with a broken leg came by to help glue on rhinestones and my Dad packed and shipped all of the orders.
I was up at five AM and glueing seashells until midnight pretty much for two months.
The highlight of my Holiday season was my Wednesday night acting class, this was when I got to  put on makeup, leave the house and talk to other humans! Otherwise I am not ashamed to say that I did not even take time to take a shower… I wanted my customers to get their orders in time for Christmas, and they did!
Well after the Holidays were over, the orders kept coming in, I finally reached a point where I just couldn’t bring myself to make another pretty Seashell Letter… so the the ones you see in my video are the last ones…. And, I am giving them away! Just watch the video to find out how you could win these letters and learn how to make your own! They a really fun to make if you don’t have to make so many,
I promise!