DIY Marquee sign from a shipping crate and Rit dye!

A few months ago I got a call from Angela Daniels a.k.a. The Guilty Crafter.  Angela was also one of the contestants on Craft Wars! 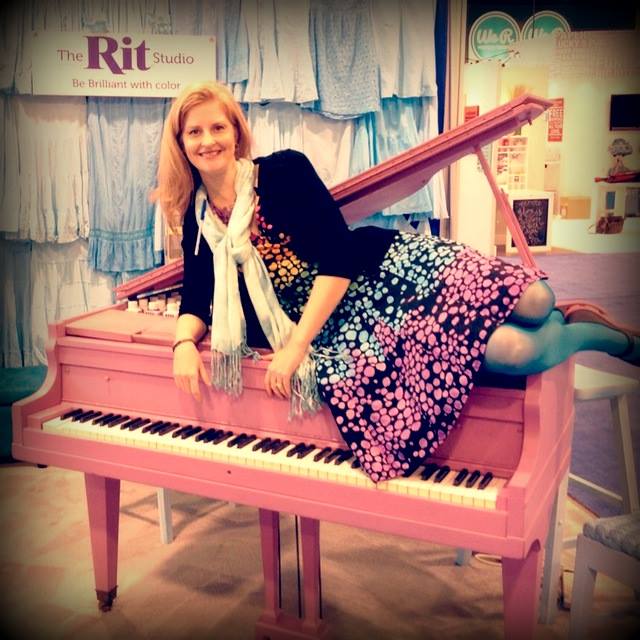 I was totally obsessed with Craft Wars  which was challenging because I don’t own a TV,  I had my parents tevo it for me so I could watch it at their house.

I caught every episode, fully memorized,  like an armchair quarterback, cheering the designers on, and shouting instructions at them from the sofa,  ” use the glue gun you fool… tacky glue will never work for that!”

“mix the glitter with Mod Podge for goodness sakes, you’re making a huge mess and it’s going to take twice as long and the clock is ticking!”

I  had some words for the judges too, ” what are you crazy? you’re really going to mark them down for hot glue strings????   You allowed a measly 30 minutes to make that thing…. what did you expect? It’s not about neatness, it’s about the DESIGN and the design is awesome, are you blind????

Ok, I got distracted, back to the phone call from Angela, “Hi Debi this is Angela Daniels…”  In addition to all the things I listed above, Angela is the Network Coordinator at Rit Dye and she was calling to see if I’d be interested in making a video project for Rit.

Of course, before Angela could explain any of the details, I had to quiz her about Craft Wars and find out if there was going to be a second season, unfortunately there are no rumors of Craft Wars coming back anytime soon,  well that’s a huge disappointment…. I have daydreamed about becoming  a contestant myself,  wowing the judges with my mad skills, I’ve already decided who my crafty assistant is going to be and I have my Google alerts set to notify me if auditions are posted. I still have hope, Angela probably can’t tell me anything, that kind of information is always top secret.

In a nutshell, I agreed to make a project and video for RIT dye and have it ready in early January, it was set to be on display in the Rit booth at the CHA Mega Craft tradeshow.

I had no idea what I was going to make, I was knee deep in the Christmas craziness at my shop, so I just put my ideas  for Rit on the back burner until Christmas was over, a few weeks later a giant box of Rit dye arrived.

I logged on to Pinterest to see what other people were doing with RIT dye, and I was amazed that Rit  is not just for clothing,  it’s used for all kinds of things, one of my favorite tutorials, dyeing bottle brush trees in pastel colors from Dear Lizzy.

I decided to make marquee letters cut from scrap wood,  and then dye each letter in various shades.  I sketched out my plan, gathered the materials and got everything ready for filming….  I ran across the street to grab a cup of coffee and on the way back I saw this in my neighbors dumpster…. 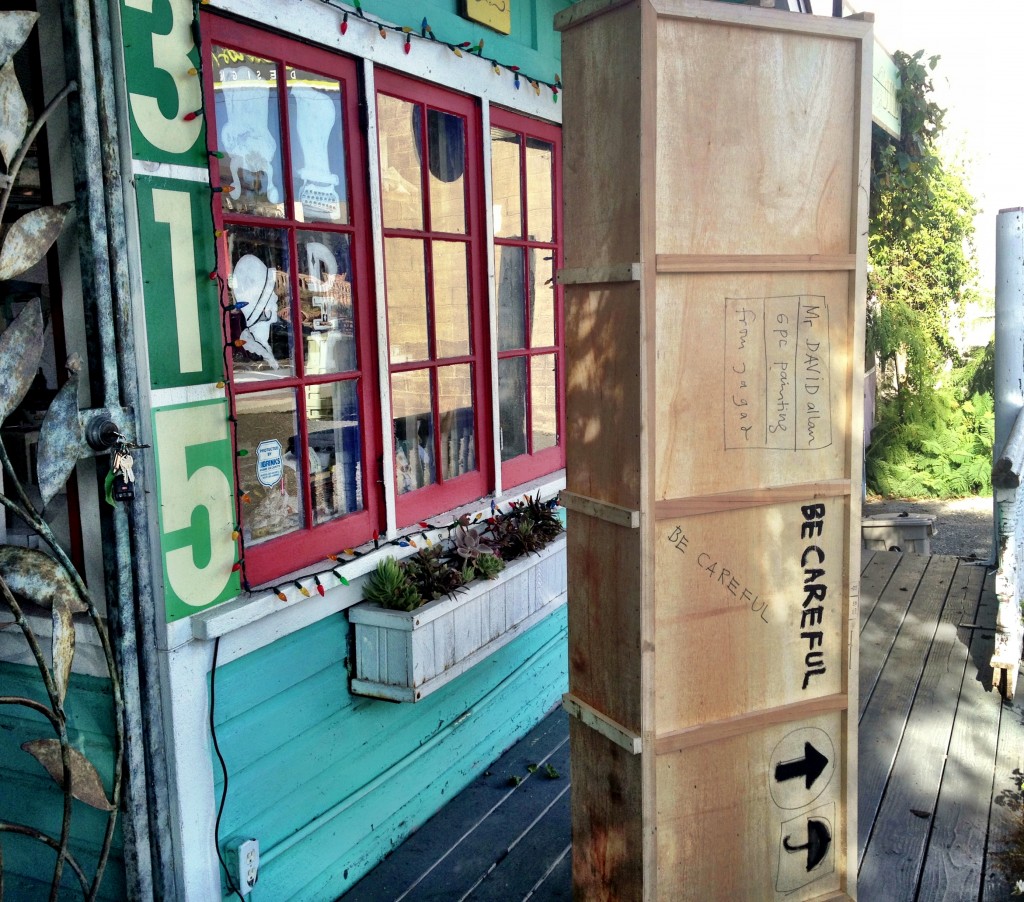 Sweet mother load….. I carried the crate back to my shop, fellow merchants gave me curious looks as I hauled it down the street. I imagined them whispering to each other, ” there goes Debi, look at her digging in the dumpster again I wonder what she is doing now?”

My shop is located in a 1920’s cottage that has escaped the wrecking ball, it’s in in the middle of a very hip high-end design district surrounded by large warehouses.  I’m pretty sure I have a reputation for being the Sanford and Son of the street, I hoard furniture and roadside relics, and it’s an understatement to say  that my shop sticks out like a sore thumb.

I dragged the crate into my workshop and started sketching out new plans, just as Bobby my carpenter/assistant showed up to start filming.

“What are you doing? ” Bobby said, with the slightest hint of irritation in his voice… I explained the new game plan with a smile on my face and as always he helped me execute my crazy vision. Most of the time Bobby is just as enthusiastic about the project as I am, but this time he was annoyed. It wasn’t until the very end, when we plugged in the lights that he smiled and got excited about what we had created.

Watch the video and see how we transformed this dumpster treasure,

This is no doubt my favorite project of the year, granted I have only made one project so far this year, but still ! 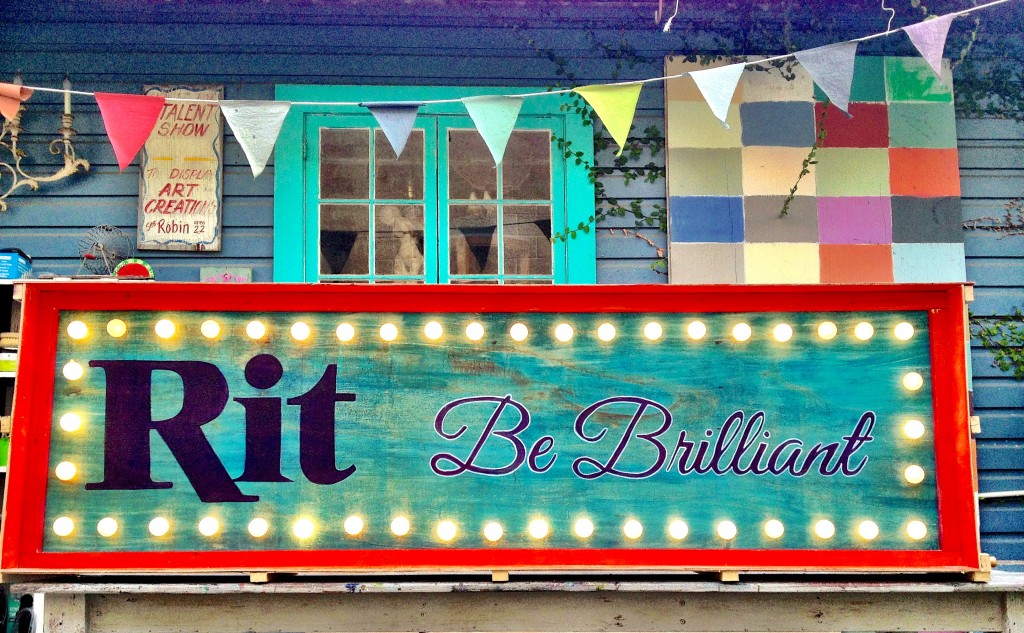 What have you dyed? I’m dyeing to know! to see more Rit projects visit the Rit Studio!

Stay tuned,  I have a video coming up  next week from my trip to CHA, I met some very fun and creative people. you won’t want to miss it!

this week I’ll be linking up at Redoux Interiors a dreamy blog for dumpster divers, be sure to come join the party!